With many states now planning their reopening processes, it seems like the end to the COVID-19 crisis might be somewhere on the horizon. Or, rather, we’re at least learning how to live with it.

As someone who hadn’t ventured out of her apartment since March 20th except for a solo trip to the doctor once in April, I felt as if I could finally try going outside. Donning a mask, gloves, and glasses to cover my eyes, I decided to bike around to see what my city was really like now.

It certainly has changed.

The first stop on my journey was the building I used to enter every day for work. I would think nothing of getting dropped off by the entrance and pushing the handle of the revolving door before scanning my badge to go upstairs. Now the entrance, though lit, was dismally empty. The remainder of the ground floor had been converted into a food bank outpost.

I went on past The Shops at Hudson Yards and stared up at The Vessel, which no longer crawled with tourists. Its shiny hull no longer reflected the crowds that would gather beneath it. 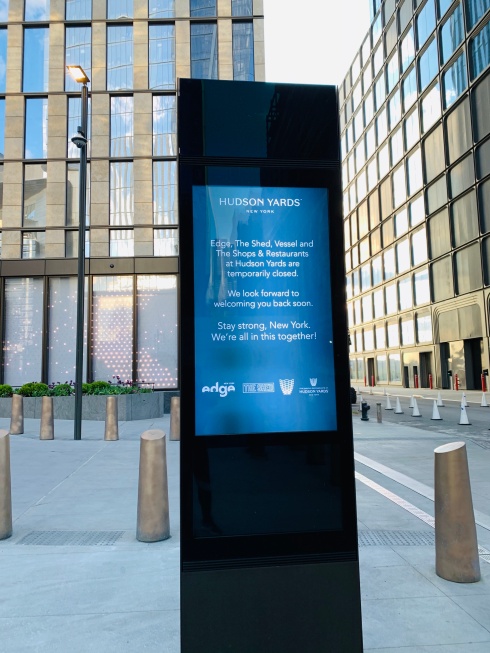 The gym I used to frequent was devoid of life. The hotel next to it was as equally quiet, as if the entire building was sleeping or had been frozen in time.

The entrance to The High Line was closed. It made sense. After all, though long, the walkway was narrow and not conducive to six-feet distancing.

I biked on, noticing a doorman step outside to the front of his building, clapping and cheering as he exited. I looked down at the time and saw that it was exactly 7pm.

It was the time to cheer for the essential workers, such as that very doorman, who allow the city to function as best it can in these times. I cheered with him and gave the bell on my bike a few solid rings.

As I cruised down the road, a woman emerged from a brownstone banging a ladle against a pot. We exchanged what smiles we could with our faces covered, mainly by just noticing the smile creases around the eyes. I gave my bike bell a few more loud rings.

The lone car in front of me emitted a few celebratory honks.

When I came to the next light, the cheers had fizzled out.

I pedaled on, feeling a wave of anger swell in my gut when I saw individuals refusing to wear masks. Deciding not to say anything, I headed further downtown.

Restaurants that I had passed by or dined at before all of this were mostly shuttered. Occasionally an entrance would be lit and an optimistic sign outside would advertise “Open for Delivery/Takeout”.

A few of the still-functioning establishments even had signs for ‘Take-Away Cocktails’. One socially-distant cocktail pickup booth showed signs of life.

I pedaled to the outskirts of Soho, where the usually busy strip of shops that I loved to wander by now sported apologetic signs on their doors. Some were boarded up entirely. 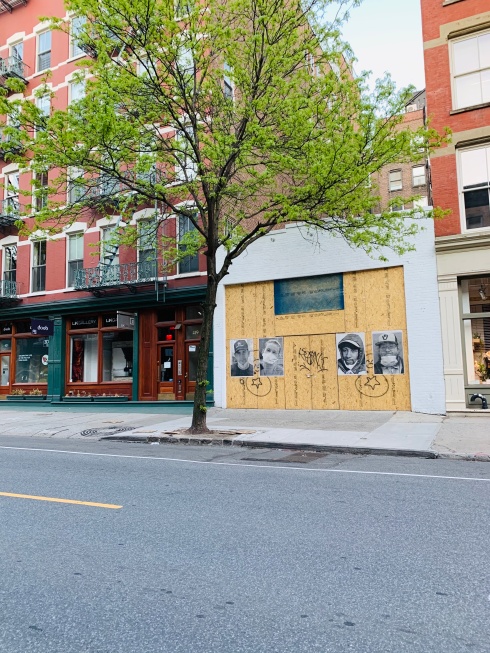 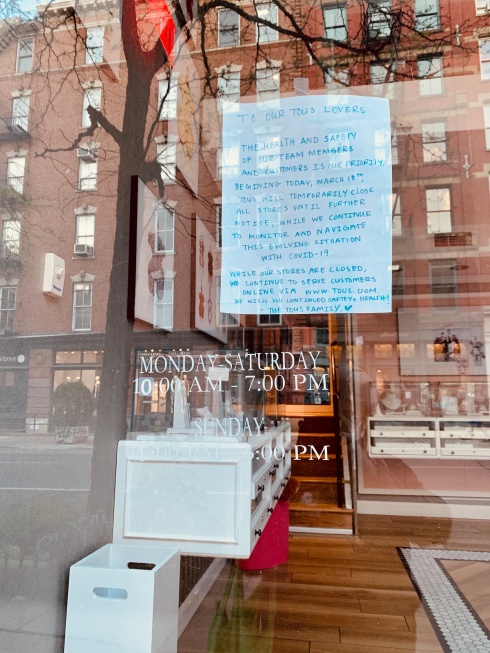 Far too many ‘for lease’ signs were plastered up on ground floor windows.

I pedaled on in a daze.

Tears welled in the corner of my eyes, but I wasn’t sure what particular aspect of this crisis to even attribute it to.

The city that I love to write about had been effectively shut down.

NYPD cars slowly drove along on the streets ahead of me, patrolling what was left to patrol.

I headed back uptown, just taking it all in. Eventually, I made it back to the Upper West Side grocery store where I had originally intended to go.

I entered and picked up a few things for dinner, making sure to only touch the packages that I intended to purchase. I cautiously went to the self-checkout and used Apple Pay so I didn’t have to touch the reader.

It was only later that I realized that, for the first time ever, I had accidentally left half of my groceries behind.